Boston’s brokered-ethnic WNTN/1550 sells to one of its longtime program hosts, Teddy Demetriades. Teddy’s the son of earlier “Grecian Echoes” host Orestes Demetriades, and they say “Echoes” has been on-air in Boston for “more than 67 years.” In fact, Orestes owned WNTN until 1998, when he sold it to Rob Rudnick of Colt Communications. 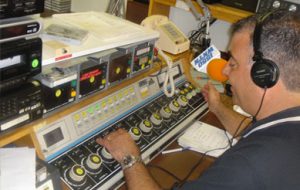 Now his son Teddy is purchasing WNTN Newton from Rudnick for $175,000 cash. Teddy currently buys about 25 hours a week from Colt (7am-11am weekdays and 7am-noon on Sundays). We don’t know what other changes might be wrought, but WNTN’s definitely moving its transmitter, because that’s not part of the sale. WNTN will re-license to Cambridge, losing its current 10,000-watt day/3-watt nighttime facility to diplex with Bob Bittner’s adult standards WJIB Cambridge/740. WNTN’s new facility will be 750 watts daytime and (still) 3 watts at night. Also not part of the deal – the WNTN.com website here headlined “The World and You.” As for long-ago owner Orestes Demetriades – he’s now 94. Maybe radio does keep you young.

Paul Parent, host of The Paul Parent Garden Club has passed away