Mary Richardson, legendary Boston broadcaster and former longtime co-anchor of Chronicle on WCVB Channel 5, passed away after a brave seven-year battle with Alzheimer’s Disease. She was 76. 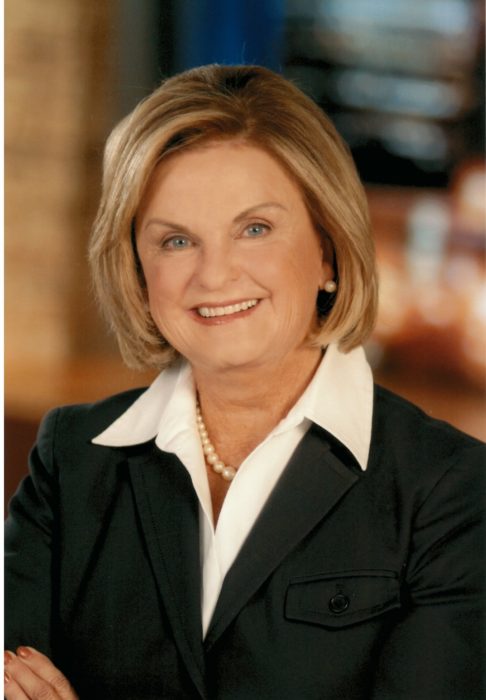 Richardson is survived by her husband Stan Leven who was a longtime senior producer for Chronicle. Leven said, “Mary never let her Alzheimer’s define her or slow her down. She was as real as real could be, a force in motion and always gracious, stopping to talk to her fans. Our family came to accept that we share Mary, you can’t contain Mary.”

Richardson is also survived by her three children Chris, Jessie, and Matt as well as two grandchildren.

A beloved member of the Channel 5 family for more than 30 years, Richardson joined WCVB in 1980 as a news reporter and anchor, as well as host of the weekly public affairs program “Five on Five.” In 1984, she joined Peter Mehegan as co-anchor of the station’s acclaimed Chronicle, now the nation’s longest running locally produced nightly newsmagazine in the country. From 2005 until 2010, Richardson co-anchored Chronicle with Anthony Everett.

Paul LaCamera, former WCVB Channel 5 President and General Manager, and friend of Richardson, said, “As Chronicle celebrates its 40th anniversary, Mary is remembered as part of the program for most of those 40 years. She brought a joy, a pride and a celebration of where we live here in New England. Mary had it all, a fine reporter, writer, producer, smart, attractive, affable and possessed that classic indomitable Irish spirit and wit. A dear colleague and friend to all of us.”

“We are deeply saddened to learn of the death of Mary who was one of Channel 5’s most cherished and highly-regarded journalists whose standard of excellence influences Chronicle to this day,” said Kyle Grimes, WCVB Channel 5 President and General Manager. “We send our deepest sympathy to Mary’s family, and we will always be grateful to her for the countless contributions she made to the station, the industry, and the community.”

Richardson’s work on Chronicle took her to locations where she told stories from around the corner and around the world, including “The Main Streets and Back Roads of New England,” her ancestral Ireland, the Great Wall of China, Castro’s Cuba, Belize, Greece, and more.

For a decade, Richardson co-hosted the annual Holiday at Pops! concert from Boston’s Symphony Hall as well as the popular Pops Goes the Fourth! celebration from the Hatch Shell on the banks of the Charles River. The concerts had been broadcast locally on WCVB Channel 5 and enjoyed by millions nationwide on the A&E Network.

The former WNAC-TV brought Richardson to New England in 1978 when she became the first woman in Boston to co-anchor an 11PM newscast. She quickly established herself as one of Boston’s most popular local television journalists. Richardson began her broadcasting career in 1973 at KCRA-TV in Sacramento, CA. By 1975, she was that station’s co-anchor for the 5PM and 11PM newscasts.

In 2011, Richardson was inducted into the Massachusetts Broadcasters Hall of Fame for her decades of accomplishment in the media industry. In 2010, Richardson received the first-ever Tim Russert Award from Boston Healthcare for the Homeless. Other honors bestowed on Richardson include: a 2010 Pinnacle Award from the Greater Boston Chamber of Commerce for Lifetime Achievement; the 2009 National Academy of Arts and Sciences Silver Circle Award recognizing Richardson’s significant contributions to her community, the television industry and to individuals training for careers in the field of television; a 2009 Honorary Doctorate from Regis College; and the Exceptional Woman Award in 2008.

Over the years, Richardson generously donated her time to countless Massachusetts charities, such as Horizons for Homeless Children in Boston, where she volunteered reading to homeless children. Richardson also contributed her talents to Boston Healthcare for the Homeless, the Catholic Schools Foundation Inner-City Scholarship Fund, as well as the New England Province of Jesuits.