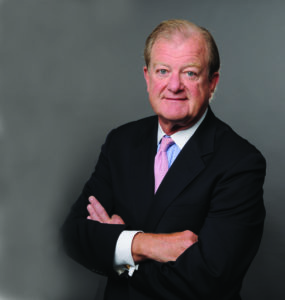 New York, NY – August 15, 2022 – It is with great sadness that the Broadcasters Foundation of America shares the sad news of the passing of its longtime President and beloved broadcaster Jim Thompson.  Thompson, who fought a valiant struggle against throat cancer for nearly a year, passed away last night in Summit, NJ, at the age of 75, surrounded by his family.  The family has requested that, in lieu of flowers, donations be made to The Jim Thompson Memorial Fund, which has been established by the Broadcasters Foundation in honor of Thompson’s dedication and service to the broadcasting industry and to the Foundation’s charitable cause of providing financial aid to Radio and TV professionals in acute need.

“I am very proud to have known Jim for nearly 40 years as a colleague and a friend,” said Scott Herman, Chairman of the Broadcasters Foundation. “Jim believed deeply in helping others and his passion and enthusiasm for life always lit up a room. Broadcasting has lost a great man, who always saw the positive in every person and every situation. He will be sorely missed.”

Thompson took over the reins of the Broadcasters Foundation in 2009, guiding the charitable organization to more than quadruple the amount of financial aid it distributes to Radio and TV professionals from $400,000 to nearly $2 million last year.

“When the Board of Directors was searching for a President, Jim’s reputation as a leader combined with his compassion for others and his ability to rally people together made him the perfect choice,” stated Phil Lombardo, Chairman Emeritus of the Broadcasters Foundation. “His accomplishments over the past 13 years helped the many TV and Radio professionals who found themselves in unthinkable circumstances and in need of aid. Our sincere sympathies go out to his family.”

Last October, Thompson announced he would be retiring at the end of 2022. Thompson had been President and CEO of Group W Radio, the second largest radio company in the country during his leadership, and along with Mike Craven was co-owner of Liberty Broadcasting, a nineteen-station radio group concentrated on the east coast. He began his broadcasting career as an account executive at KYW-TV, Philadelphia in 1971, where he rose to Vice President and General Manager.

An innovator and visionary, Thompson created the Radio-Mercury Awards to encourage and reward excellence in radio creative. He served on the boards of the Radio Advertising Bureau and the Advertising Council, was Vice Chairman of the Pennsylvania State Broadcasters Association and a member of numerous committees, including the NAB Radio Futures Committee.  Thompson was named “Radio Executive to Watch” by Advertising Age, “Radio Executive of the Year” and “One of the Most Influential People in Radio” by Radio Ink Magazine, where he also appeared on the cover numerous times. A member of the U.S. Army, Thompson served in Vietnam.

Thompson is survived by his wife Cindy, his five children, Meghan Cima, Shannon Gardiner and her husband James, Katie McElwee and her husband Tommy, James Thompson and his wife Madison, Molly Thompson, seven grandchildren, and his brothers John and Thomas.

The Broadcasters Foundation of America provides financial aid to broadcasters who have lost their livelihood through a catastrophic event, debilitating disease, or unforeseen tragedy. Personal donations can be made to the Foundation’s Guardian Fund. Corporate contributions are accepted through the Angel Initiative, and bequests can be made through the Foundation’s Legacy Society. For more information, please visit www.broadcastersfoundation.org, call 212-373-8250, or email info@thebfoa.org.

About the Broadcasters Foundation of America: www.broadcastersfoundation.org

The mission of the Broadcasters Foundation of America is to improve the quality of life and maintain the personal dignity of men and women in the radio and television broadcast profession who find themselves in acute need. The Foundation reaches out across the country to identify and provide an anonymous safety net in cases of critical illness, advanced age, death of a spouse, accident, and other serious misfortune. The Broadcasters Foundation of America is a 501(c)3 Public Charity and has been rated 100 from Charity Navigator for solid financial health and received full credit for its program to expense ratio.