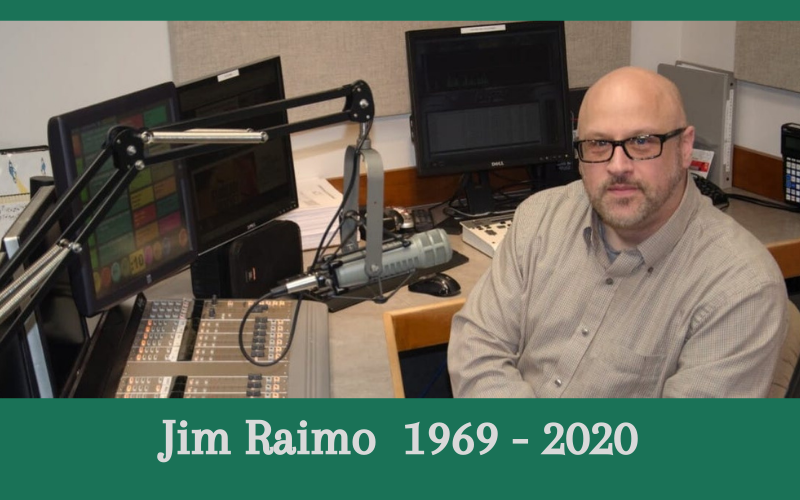 James (Jim) A. Raimo, 51, of Enfield, beloved husband and best friend of Jennifer (Haupt) Raimo, and loving father of Lucy and Nora Raimo, passed away peacefully at his home on Thursday, September 17, 2020.

Jim was born in Waterbury, son of Florence (Rykoski) Raimo and the late Alfonso Raimo. He graduated from Windsor High School, Class of ’87 and received his Associates Degree in Business Administration from Asnuntuck Community College. Jim also studied Business at Bryant University and Fire Technology and Administration at Capital Community College. Earlier in his life, he was a Volunteer Fire Fighter with the Poquonock Volunteer Fire Department. Since 1995, Jim has been employed as the Program Director/Brand Manager at Entercom Communications in Springfield, MA. He was a very “hands on” director and would fill in wherever and whenever needed, even being an on-air personality on Sundays. Jim loved his job and his work family will also truly miss him.

Jim was a loving husband, father, son, brother, nephew, uncle, cousin, and dear friend. His family has an ache in their hearts with his passing and will fondly remember him as a loving, giving, and caring man whose family meant the world to him. Jim was a kind-hearted man who had a huge heart. He loved to help people, which was apparent with his dedication and hard work at the radio station organizing and facilitating their “Radio-Thons.” He organized the 911 station fundraisers and also helped raise almost 4 million dollars for Bay State Children’s Medical Center. He participated not only because it was his job, but because he truly wanted to be a part of helping those in need in any way possible. He even refused to do this on company time; he always requested to use his personal time so that he could be fully involved with no distractions. He never wanted to be the center of attention but always wanted to be fully involved.

Jim had a wonderful personality and had a positive attitude about everything. So many people relied on him for different things, as he was very supportive, and was everyone’s rock. He had an amazing sense of humor, was quick-witted, and had an infectious laugh. It was hard not to be happy when you were around him.

Jim loved his family so much and Jenn and the girls meant the world to him. He was also very close with his sister, Cindy, and they have always been the best of friends. Jim loved planning get togethers with his friends and family and especially loved taking trips to their cabin in Corinth, VT to get away and enjoy nature, work on the house, and sit by the fire and listen to music, especially Folk and Blue Grass.

In his spare time, Jim practiced the ancient art of Underwater Basket Weaving and also loved to knit scarfs and sweaters for his family and friends as Christmas gifts.

His family extends a sincere thank you to everyone who sent flowers, cards, food, or called the house to let us know how much Jim meant to you. Your outpouring of love has been greatly appreciated. Thank you to his doctors and nurses for their care and respect shown to Jim and for helping him with everything he needed. We appreciate all the support and prayers that were offered on our behalf.

His family will schedule a Memorial Service to honor his life in the future when we can all safely be together.