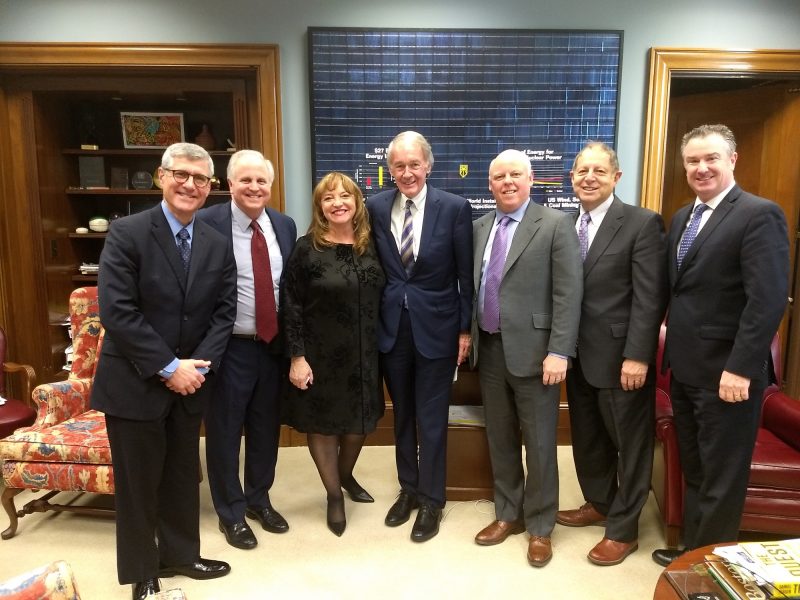 In a busy two day stretch in late February, representatives from Massachusetts radio and television stations took to Capitol Hill to advocate on behalf of all MBA members during the National Association of Broadcasters State Leadership Conference.

Mary Menna and Tom McAuliffe led the radio advocacy by thanking Representatives Lynch, Keating, and Moulton for their ongoing support of the Local Radio Freedom Act (H.Con.Res.20), a non-binding resolution that calls for no new additional taxes or fees on local broadcast radio.  The NAB and MBA are pushing to secure 218 co-sponsors again in the 116th Congress to discourage the introduction of a performance tax on radio members.

The group also advocated for the PIRATE Act, which passed the House of Representatives while we were in Washington but has yet to be introduced in the Senate.  This bill would give additional power and resources to the FCC to combat illegal radio operators, particularly in pirate radio “hot spots” like New York/New Jersey, Miami, and Boston.

For television, members asked for Congress to let STELAR (Satellite Television Extension and Localism Act Reauthorization) expire.  This piece of legislation allows satellite television providers to import distant signals from New York or Los Angeles to twelve markets across the country that were previously underserved by local broadcast stations.  In 2019 the technology exists for satellite companies to provide local stations and viewers deserve to get local news, weather, and emergency information.  While none of the affected markets are in Massachusetts, broadcasters are also trying to prevent other measures from being tacked on to STELAR.

Our television members gave the delegation an update about the television spectrum repack asking for continued monitoring of the process from Congress as well as offering to help the offices communicate with constituents when it is time for them to rescan their TVs later this year.

While advocacy is an intense focus at State Leadership, it is a constant focus throughout the year by your association.  Stay tuned to MassBroadcasters.org for more advocacy updates.

MBA members to #BroadcastGood on June 11

Five steps to get your station involved with MBA advocacy

Advocacy efforts a constant for MBA

The MBA visits Washington on your behalf