There are a number of ongoing legislative issues facing broadcasters both in Boston and in Washington DC.

For our television members we are facing an effort by Federal Communications Commission Chairman Tom Wheeler to end “exclusivity” rules for local broadcasters.  The end of these rules would open the door for cable systems to import signals from outside a local area, hurting both revenue and localism.  A number of state broadcasters association executives and members of Congress have weighed in on the issue with the FCC.  New York State Broadcasters Association President David Donovan wrote an excellent piece on the issue that ran on BNA.com.  Television members of the MBA sent a letter to Chairman Wheeler asking him to reconsider his proposal.  Read more about that letter here.

On the horizon, and getting ever closer, is the FCC’s voluntary spectrum incentive auction.  The auction is slated for the end of March and appears to be on schedule.  Sprint recently announced that they would not be participating in the auction while Fox Television said they will be active in the auction.  As noted in an article on Bloomberg.com, Fox owns two stations in 11 cities throughout the country.  The MBA will continue to advocate on behalf of our television members with our Congressional delegation to make sure that the FCC follows auction legislation in doing no harm to stations that choose not to participate in the auction.

For radio, the MBA continues to pursue co-sponsors for the Local Radio Freedom Act, the non-binding resolution against any new type of performance royalty for radio stations.  The resolution currently has 213 co-sponsors in the House of Representatives, five short of a majority in the House.  Massachusetts Congressmen Mike Capuano, Bill Keating and Stephen Lynch have all co-sponsored the legislation. 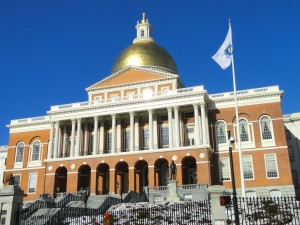 Closer to home the MBA is working on two pieces of legislation – the Media Shield Law and an anti-piracy bill for radio.

A hearing in front of the Joint Committee on the Judiciary took place on October 8 regarding the Media Shield Law, H.1533, also known as the “Free Flow of Information Act.”  Speaking in favor of the bill were co-sponsors Rep. Alice Peisch of Wellesley and Rep. James Cantwell of Plymouth along with Rep. Josh Cutler of Duxbury.  Testifying on behalf of the broadcasters was WWLP-TV’s President and General Manager Bill Pepin, WWLP-TV reporter Laura Hutchinson as well as WCVB-TV Executive Producer David Hurlburt.  The MBA and its members have been pursuing this legislation for a number of years and with new leadership on the Committee, we remain hopeful that our news media will gain protection from being forced to name their sources.

Radio’s fight to end the growing pirate radio problem in Massachusetts is also looking to move forward.  H.1536 aims to give local authorities the power to bring action against those found to be interfering with a radio broadcast.  The MBA also remains hopeful that talks with the FCC about increased enforcement against pirates will continue to be productive.

As always, stay tuned to MassBroadcasters.org and our social media channels for important advocacy updates.