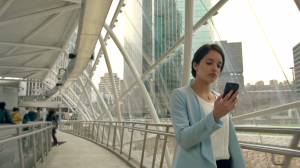 Two years ago, NAB launched the We Are Broadcasters campaign to educate lawmakers on the unique importance of free, local broadcasting. To date, nearly 1 million spots have been aired by stations across the country.  If your station is participating, thank you.

We are happy to announce that NAB has developed new creative for the We Are Broadcasters campaign called “All Screens.”  This campaign focuses not only on broadcasters’ ability to reach consumers via over-the-air broadcasts but also on their computers, tablets and smart phones.  As we transition further into the media everywhere era, it’s important that our lawmakers understand broadcasters ability to provide entertainment, news, weather and emergency information via “traditional” and “new” avenues.

Campaign instructions can be found here and click here to download the new spots for both radio and television.  This campaign is open to both NAB members and non-members.

Your participation is making a difference in Washington. Thank you for airing these spots as often as possible throughout 2015, particularly when our delegation is home on recess.  Download a copy of the 2015 Congressional calendar.  Working together, we are reminding legislators that local radio and TV are the backbone of their communities – always here for their constituents, wherever “here” may be.